Garmin eTrex 32x – in this review we will discuss the Garmin eTrex 30x successor in detail, a keyboard-operated GPS device that provides all the basic features you need for a variety of outdoor activities.

The Garmin eTrex series – the first eTrex was born in 1999 – defines together with the Garmin GPSMAP series the term "GPS handheld".

The eTrex 32x is characterized in particular by the following strengths:

What has Garmin improved in the new eTrex generation?

Let’s get right to the internal memory. Only about 90 MB are available – the pre-installed TopoActive map eats up most of the memory! For example, if you want to install additional cards, load numerous GPX tracks and various pocket queries with geocaches and waypoints, you need an additional microSD card (up to 32 GB). This gives rise to the suspicion that during the development of the 32x, the map department did not speak to the hardware department (or vice versa).

Other desirable technical innovations have also not been implemented, such as a modern USB connection (Micro-USB or USB-C instead of the built-in Mini-B). A weakness of the predecessor eTrex 30x is the slow processor. Zooming and moving the map or calling up an extensive POI collection can take some time – this shortcoming also persists.

Our wishlist is similar to the GPSMAP 64sx, especially regarding the menu: A few improvements would be great, for example functions to sort or filter the tracks in the track manager.

Hopefully a serious problem with the predecessors has been fixed: In our test fleet, an eTrex 20 and an eTrex 30 died. Reason: The rubber coating is broken, the keys got lost. Result: The device is no longer usable, which can lead to serious trouble during outdoor tours. Only an endurance test can show whether this weak point has been eliminated – we will report!

Enough of the criticism – the eTrex 32x has so many strengths that make it our first choice for long, weight-optimized tours and kayaking!

The Garmin eTrex series features a patch antenna. This also applies to the eTrex 32x – this means that the best GPS reception is theoretically achieved when the device is aligned horizontally.

Our experience has shown that track recordings are generally very accurate, even during an outdoor activity such as hiking, when the eTrex is attached to the backpack and the GPS antenna is therefore not well positioned.

In this discipline, the eTrex 32x is on the same level as our favourite – the GPSMAP 64sx. But the 32x has another strength: The position is available very fast after switching on the device – and therefore much faster than with the GPSMAP 64sx!

Garmin specifies 25 hours as battery life. We have tried the 32x with eneloop rechargeable batteries, we get the following times (in hh:mm).

Energy saving mode (all consumers off)

Power mode (all loads on)

Depending on the use case, the times to be achieved are between these values. The 25 hours indicated by Garmin thus appear very realistic.

Batteries cannot be charged in the eTrex (as is the case with Oregon, GPSMAP 64sx or GPSMAP 66s, for example); from our point of view, this is a function that can be dispensed as the charging process is very slow.

The small 2.2-inch display offers excellent readability. In addition there is a resolution like no other outdoor handheld from Garmin has – maps, fonts etc. appear razor sharp.

You have to arrange yourself with the small area, but it is perfectly sufficient for navigating with tracks – certainly the most frequently used navigation method.

The following interfaces are available:

A feature frequently requested by users – the wireless import of GPX files from a smartphone – is not available. users with Android smartphones can at least import via USB and OTG cableAmazon.

The operation with five keys and thumbstick takes getting used to (generation "Smartphone"), but can be learned quickly, especially if all possibilities for individualizing the user interface are exhausted. The Garmin eTrex 32x can also be easily operated with one hand, the same applies to finger gloves that are not too thick.

As with all Garmin GPS handhelds, there are several pre-configured profiles for different outdoor activities to choose from. Additional profiles can be created and highly personalized.

The two illustrations on the right show our main menu for a profile "Hiking": 11 applications, in addition there is a map, trip computer, altitude profile and destination input page.

The Garmin eTrex 32x offers – similar to the recently reviewed GPSMAP 64sx – the proven functionality of Garmin handheld devices. This includes navigating with tracks, routes, waypoints, POIs and geocaches, but also the many additional functions such as proximity alarms, barometer, calendar and alarm clock.

The calculation of routes is done according to the parameters "off road, on road for time, on road for distance" or "car/motorcycle, pedestrian, bicycle".

Navigating with tracks is, as usual with Garmin, quite minimalistic – you simply have to follow the magenta-colored route on the map! There is no helpful routing, e.g. to the starting point of a track, nor is there any warning when deviating from the track default.

As with the GPSMAP 64sx, the eTrex 32x can be used for any outdoor tour! The configuration and learning of all navigation functions takes some time and practice.

The Garmin eTrex 32x comes with a worldwide base map and a TopoActive map for Europe. The TopoActive map is based on OpenStreetMap data, but the map has no contour lines (figures below). However, you can activate a shaded relief to visualize the morphology – we would still prefer contour lines. All in all, this pre-installed topo map is very well suited as a basis for navigating with tracks.

The scope of delivery is minimalist. There is only one USB cable in the sales package. In addition, you need batteries and a memory card, at least one holder for the backpack and / or a bicycle holder.

Garmin provides several free software. Garmin Express or the WebUpdater for managing and installing updates, the POI-Loader for installing additional POIs and BaseCamp for planning and managing tours (all for Windows and Mac).

The eTrex 32x also has the following features:

The practical use – especially of the barometric altimeter – is high, therefore we recommend the eTrex 32x. 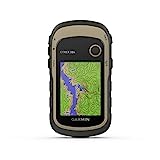 Garmin eTrex 32x, Rugged Handheld GPS Navigator *
$299.99
(As of: 2020/07/03 5:56 pm - Details)
View on Amazon *
(* = affiliate link / image source: Amazon partner program)
×
Product prices and availability are accurate as of the date/time indicated and are subject to change. Any price and availability information displayed on https://www.amazon.com/ at the time of purchase will apply to the purchase of this product.

The Garmin eTrex 32x Amazon features the same strengths and weaknesses as its direct predecessor. However, it is incomprehensible that the internal memory of the new generation is so small.

We recommend the Garmin eTrex 32x for a variety of outdoor activities. But especially for activities in which it can play off its special advantages: Size, weight and battery life that set standards.

Slow zooming and moving the map, calling up lists, etc.

How to speed up your Garmin handheld!

Your Garmin GPS device starts very slow – an annoying situation on your outdoor trip! We checked & found some reasons – read our Garmin speed up tips!

END_OF_DOCUMENT_TOKEN_TO_BE_REPLACED

gexporter & gimporter are the best apps to send GPX or FIT files from your Android smartphone to your Garmin device! Read our instructions!

END_OF_DOCUMENT_TOKEN_TO_BE_REPLACED

Garmin – How do I transfer tracks or courses using Bluetooth?

You want to transfer tracks or courses to your Garmin GPS device using Bluetooth? Read our guide for handhelds, cycling devices & wearables!